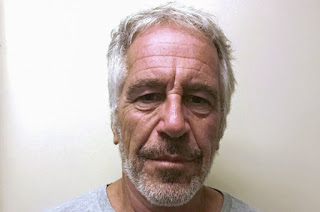 Jefferey Epstein, teacher turned banker turned billionaire with a taste for young girls was found dead in his cell at the  HIGH SECURITY Metropolitan Correctional Center in New York City . Epstein was one suicide watch after his previous suicide attempt 3 weeks ago, but was taken OFF suicide watch 12 days before his death on august 11th.
President Donald Trump has retweeted conspiracies suggesting Bill and Hilary Clinton are responsible for his death. Found in Epstein’s flight logs were numerous mentions of Bill Clinton and Donald Trump.

Trump has been quoted as saying: “I’ve known Jeff for 15 years. Terrific guy. He's a lot of fun to be with. It is even said that he likes beautiful women as much as I do, and many of them are on the younger side. No doubt about it — Jeffrey enjoys his social life."

While Bill Clinton himself was on Epstein’s flight logs at least 26 times.


Current and former presidents aside, many powerful and wealthy people have been implicated in Epstein’s crimes.

On June 30, 2008, after Epstein pleaded guilty to a state charge (one of two) of procuring for prostitution a girl below age 18, he was sentenced to 18 months in prison. While most convicted sex offenders in Florida are sent to state prison, Epstein was instead housed in a private wing of the Palm Beach County Stockade and, according to the sheriff's Office, was after 3 and a half months allowed to leave the jail on "work release" for up to 12 hours a day, 6 days a week. This contravened the sheriff's own policies requiring a maximum remaining sentence of 10 months and making sex offenders ineligible for the privilege. He was allowed to come and go outside of specified release hours.

American officials across the political spectrum have demanded answers and investigations into Epstein's death.

Sen. Ben Sasse of Nebraska sent a letter to Attorney General William Barr Saturday afternoon demanding the Department of Justice investigate Jeffrey Epstein's apparent suicide in jail. Sasse also called for those who allowed Epstein's death to occur under their watch to be fired.

“We need answers. Lots of them,” Ocasio-Cortez, a member of the House Oversight and Reform Committee, tweeted.

If nothing else, his life, death, crimes and unanswered questions are a perfect example of how wealthy powerful elites live in a different criminal justice system than the working class.