The Attacks on Bernie Are getting absurd, they will only get absurder

Okay, I didn't know absurder was actually a word.

But it seems like the major outlets are cranking out the Bernie is sexist, Bernie already won because his policies are now mainstream so there's no need for him to run! Bernie is this! Bernie is that! He's too old but Biden isn't!

It's seriously insane if you don't exist inside the establishment bubbles. These attacks don't even make any sense. Lets break them down one by one:

Bernie is sexist.  Says the New York Times. Okay they didn't actually say that but they heavily implied it, the headline and photo they used set the tone of the article. But we're talking about a guy who has been arrested multiple times and at least once that I know of for chaining himself to black women. 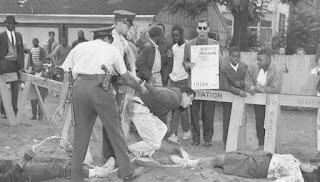 Okay, next: Bernie doesn't need to run because everyone already adopted his policies. This is one is especially shallow. Its thinner than gift wrap with an eating disorder. To believe this argument, you have to also believe that Corey Booker, Kamala Harris, and everyone (first time I've used my own page as a source, boy that feels good)  that isn't Elizabeth Warren are better than their actual voting records and campaign finance records suggest. Everyone that the mainstream is encouraging, Biden, Beto, Harris, Booker, and so on, everyone that isn't Bernie or Warren, simply ask yourself why the New York Times or CNN or MSNBC is supporting those candidates. Because they will play ball with the democratic donors. That's it. Its not complicated. Sanders and to a lesser extent Warren threaten the power structure that has made so many people so undeservedly rich and powerful and they would prefer that a democratic socialist with a wonderful haircut doesn't stop that gravy train.

I haven't seen a Bernie is too old article in a while, but trust me its going to happen. The people writing these articles are so far up their own ass (or bubble, whichever floats your goat) they can't see that Bernie is by far the most popular politician in the country (because of his policies) with the most name recognition. If you want to understand why the media is doing this, read Manufacturing Consent. The mainstream media are not watch dogs to power, they're lap dogs.

If there is one argument for why Bernie shouldn't run that actually makes sense, its because Warren has already thrown her hat in the race and it will split the progressive vote. Other than that, its all hogwash.
By Outraged News - January 08, 2019