What started out as a #PeacefulProtest for #SaferRoads has turned into a nightmare for the students of #Bangladesh. The government is sending goons to attack the students and disrupt their protests which has led to a lot do injuries, death and rape. #RebootBangladesh
— Shihab (@notshihab) August 6, 2018 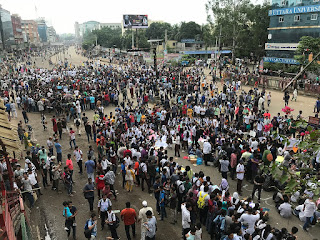 On the 29th of July, two bus drivers were racing to pick up passengers and killed two students who were waiting for a bus. Since then, high school and college students took to the streets and have been protesting peacefully against dangerous road conditions (i.e. no driving and traffic regulations and poor enforcement). They took it upon themselves to manage traffic (creating emergency lanes; arranging them according to vehicle size) and checking licenses of every passing vehicle (including police vehicles) on major roads.

There are several students now dead and missing; all they did was demand safer roads in a country where people die from road accidents every single day. They took to the streets and checked licenses, regulated traffic, exposed an incredible number of people including government and ministry workers for driving without valid licenses. They had been doing a better job than traffic regulation and law enforcement officers in the city, and all they wanted was an assurance of safety.

This protest was entirely peaceful, wholesome and supported by most citizens. The government’s reaction to this was to send out student political parties to also don school uniforms and partake in the demonstrations. These “students” infiltrated the protests and initiated violence both on the students and public property, followed by law enforcement doing the same: opening fire and using anti-riot equipment such as tear gas, aimed at protesters who were 13-20 years old.

This event has gained traction on international media recently, and has been covered by multiple media outlets such as the New York Times and BBC. However, they’ve stated multiple times that the government claims these were instigated by the opposing party, while other parties have been trying to twist the narrative to fit their own agendas. However, that is NOT true. These are young students protesting PEACEFULLY against law-breakers and unsafe roads, they have no political affiliations whatsoever.

The government has also shut down mobile data in the country and slowed down internet speeds. They have been arresting and detaining people for posting things online that implied dissent, and multiple journalists have been attacked, detained and had their recording equipment seized and destroyed. The media was made to withdraw many of their previous statements and say their sources were wrong, and some hospitals are being pressured into turning away students who were injured at the protests.

Today, Bangladesh is a battleground. These "student politicians" have turned the streets into a hunting ground, chasing down these peaceful protesters and brutalizing them. They're literally hunting anyone that looks like a student and murdering and mauling in the most inhuman ways... And these monsters are supported by the government. Law enforcement and these thugs (who are all armed beyond their pay grade) have murdered multiple people already, committed other crimes like rape and also attacking those trying to help the children.