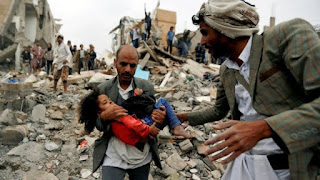 Yemen's last port thats providing 80% of food and medicine is under siege, if destroyed 18 million could die. Thats the holocaust times three.

Right off the bat, what the media won't tell you about this Saudi Led US backed war is that its a proxy war against Iran. The Houthis seized control several years ago and Saudi Arabia doesn't like that. So with our blessing and tax dollars and bombs and planes the Saudi's have been decimating the country. Genocide is a strong word to use and its justified using it in this context.


Normally if there is a way to spin an ongoing crisis like this, it will be done. Look no further than Syria as a prime example. But on the crisis of Yemen? Which is poised to be literally 3 times as bad as the holocaust? Crickets. And thats because theres no angle to spin here. Saudi Arabia is committing a genocide with our tax dollars and the main stream media is being almost entirely silent on the issue.


Theres not much to say about this, both parties are complicit in supporting this genocide with only a few senators (Bernie Sanders, Rand Paul and a handful of others) calling for an end to US aid to the war. Ro Khanna in the house has also made a stink about this on Democracy Now! But without mainstream coverage its looking incredibly bleak.

This is what happens when we rent out our military to the ISIS that made it country. But we can't just let Iran have more power and influence in the region! Look, theres no overarching strategy here beyond controlling as much of the oil in the region as possible if only for the sole reason that other imperial powers don't get their hands on it. If we didn't want Iran to be a powerful force in the region we would have not invaded Iraq which made Iran stronger.

What can be done? Call your representatives and talk to your friends and family about the issue. MLK said it best, "be the change you want to see in the world".
By Outraged News - June 18, 2018